If you are attracted to the wild side of skiing, you have the taste of effort and you get tired of ski resorts, it’s time to go ski touring …

The mountains around us are a small paradise in winter for ski touring. Only thirty minutes from Annecy (for the closest), our mountain guides and our ski instructors offer you three outings that will suit your level. For privileged supervision, we offer private commitments for one to four people, to share with friends, as a couple or as a family. 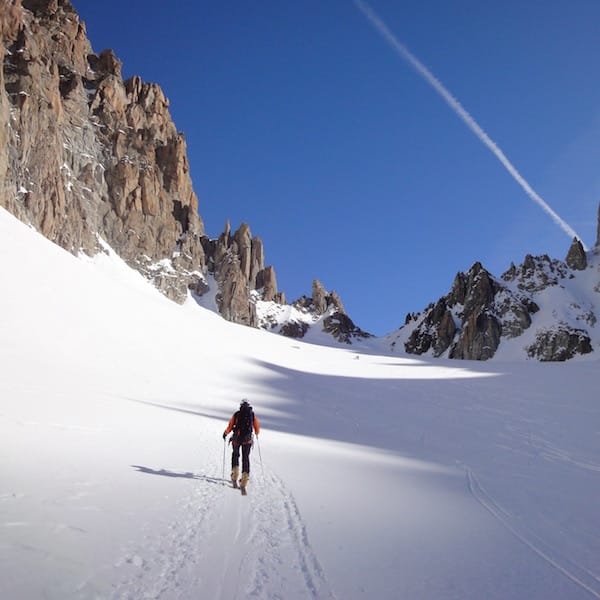 Our formulas to discover ski touring

A team of passionate guides and instructors

Where are the excursions in ski touring?

In Savoie and Haute Savoie, depending on your level and conditions, the professional choose with you an outing in one of the massifs near you…

What level of skiing do you need for ski touring?

To appreciate the downhill skiing, you have to have a good technical level in downhill skiing that is to say to ski with parallel skis on a red slope and especially to ski on all snow (snow, snow, powder field hump) … It also takes a good physical condition to be able to climb without too much fatigue.

What do we need?

For ski touring, you must plan your ski touring equipment: ski touring skis with ski touring bondings, sealskins, poles, ski touring boots and a large backpack. Your insctructor will give you a shovel, a probe and your avalanche transceiver. Depending on the outing you are going to make you also need a pair of crampons, an ice ax, a harness …

When can we go ski touring in Savoie and Haute Savoie?

In our mountains, the season for ski touring goes from December to the end of April, but this can vary according to the seasons.

This website uses cookies to improve your experience while you navigate through the website. Out of these cookies, the cookies that are categorized as necessary are stored on your browser as they are essential for the working of basic functionalities of the website. We also use third-party cookies that help us analyze and understand how you use this website. These cookies will be stored in your browser only with your consent. You also have the option to opt-out of these cookies. But opting out of some of these cookies may have an effect on your browsing experience.
Necessary Always Enabled
Necessary cookies are absolutely essential for the website to function properly. This category only includes cookies that ensures basic functionalities and security features of the website. These cookies do not store any personal information.
Non-necessary
Any cookies that may not be particularly necessary for the website to function and is used specifically to collect user personal data via analytics, ads, other embedded contents are termed as non-necessary cookies. It is mandatory to procure user consent prior to running these cookies on your website.
SAVE & ACCEPT
WhatsApp us