Monte Medio offers a private and original Via Ferrata on the heights of Lake Annecy : Via-Tyro.

An accessible Via Ferrata with everything you need to fill your sensations in a fabulous setting between lake and mountains.

Climbing, hiking, monkey bridge and a course of zip lines to end in style …

At the middle path between hiking and climbing, one via ferrata is a route in height where we evolve on cliffs equipped with cables, bars, scales, sometimes monkey bridge or zipline!

On Annecy, in Savoie and in Haute-Savoie the circuits of Via ferrata are not lacking, there is certainly a which corresponds to you. Here is our selection… 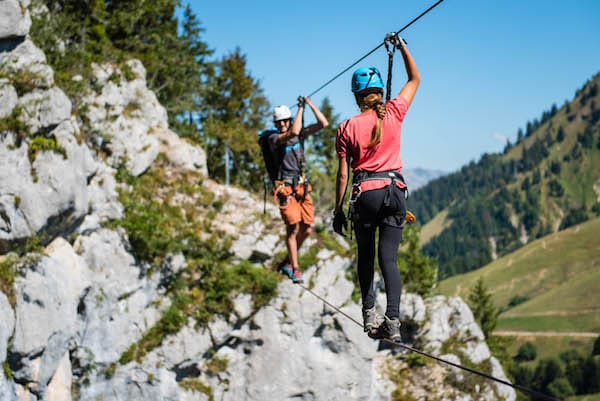 Our Via Ferrata around Annecy

The only one via ferrata around Lake Annecy

What is a via ferrata?

A via ferrata is a route equipped on a cliff. To facilitate the climbing, bars and cables are sealed there. The cable allows to make sure. We are equipped with a climbing harness on which there are two leaches with karabiners. In via ferrata it is recommended to carry a helmet.

Where is the meeting point for the via ferrata?

We propose you several Via Ferrata which are situated in the departments of Savoie and Haute-Savoie close to Annecy, Thônes, Aix-les-Bains, Chambéry, Clusaz, Le Grand Bornand, Albertville, Beaufort… You will find more details of their locations by looking on the map above.

What do we need?

To make a via ferrata, plan an adapted sports gear, a backpack to tidy up a bottle of water and something there to nibble, sunglasses and a camera to take some beautiful photos… It is very important to have good shoes: sporting or hiking boots. According to the season and the height he can make freshly, plan a jacket cut wind and a pullover. Your guide will supply you the specific equipment : a helmet and a climbing harness with a via ferrata kit. If you have long hair, think of attaching them and if you wear glasses plan a cordon not to lose them.

When can we do Via Ferrara around Annecy?

n the departments of Savoie and Haute Savoie, some Via Ferrata can be climbed all year round like that of Thônes or Col du Chat. For the other Via Ferrata located in the mountains, the season is shorter because when they are snowy they are not passable. It starts from April or May and runs until the end of fall.

Do you want to discover more Via Ferrata?

If you have already climbed the Via Tyro of Annecy or the one of Thones and you want to see more, we can on request accompany you on that of La Clusaz or Grand Bornand. In our neighboring department in Savoy, there are also some beautiful via ferrata including that of the roc du vent in the Beaufortain or that of Jules Carret above Chambery.

This website uses cookies to improve your experience while you navigate through the website. Out of these cookies, the cookies that are categorized as necessary are stored on your browser as they are essential for the working of basic functionalities of the website. We also use third-party cookies that help us analyze and understand how you use this website. These cookies will be stored in your browser only with your consent. You also have the option to opt-out of these cookies. But opting out of some of these cookies may have an effect on your browsing experience.
Necessary Always Enabled
Necessary cookies are absolutely essential for the website to function properly. This category only includes cookies that ensures basic functionalities and security features of the website. These cookies do not store any personal information.
Non-necessary
Any cookies that may not be particularly necessary for the website to function and is used specifically to collect user personal data via analytics, ads, other embedded contents are termed as non-necessary cookies. It is mandatory to procure user consent prior to running these cookies on your website.
SAVE & ACCEPT
WhatsApp us